The day after Shabatt, our final performance started at 9 pm. This was the final day of Japan Week, and we were closing it out as the headlining band. 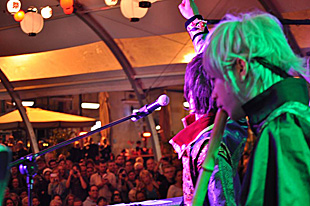 Still, after Shabbat ended at 7 in the evening, how many people would come to see us at that time of night? The event organizers told us that there would be less people than the day before because only people who wanted to see HEAVENESE would come that night. Marre and Kumiko entered the venue 40 minutes before the performance, finding The First Station devoid of people. It was completely different from how it was around noon the day before.

We were really starting to wonder if people would really come. With such an uneasy feeling, we held our final performance meeting in the anteroom. Then our assistant, Natsuko, came in and told us that Idan Raichel was coming. He would be arriving 10 minutes before our performance.

It was a great surprise to find out that Israeli's favorite artist, Idan Raichel, was coming. Three weeks prior to this concert, Marre and Kumiko met him for the first time in Tokyo through a dignitary of the Embassy of Israel in Japan. That was Idan's first visit to Japan. We told Idan that we were going to Israel. In spite of that being our first meeting, our relationship began to warm up quickly, and Idan said, "Let's do a recording together when you are in Israel." Idan is usually touring the world, but when we were in Israel, by coincidence, Idan was there taking some time off. We never imagined that he would really come to see us. On top of that, he lives in Tel Aviv, which is an hour drive from Jerusalem. However, he drove himself to Jerusalem to see us.

When the event organizers found out that Idan was coming, they rushed around preparing for his arrival. Because of the chaos his presence would create, he need to be seated in a separate area away from the general public, so he was seated in the sound booth. According to our road manager, Idan's arrival had changed people's behavior, so it seems he certainly is famous in Israel. This impressed upon both Marre and Kumiko who said, "Oh, we can really see now how famous he is." We heard that Idan had arrived on time when we were still in the anteroom. The fact that a super star came on time astonished us greatly. His punctuality might represent the character of Israelis. 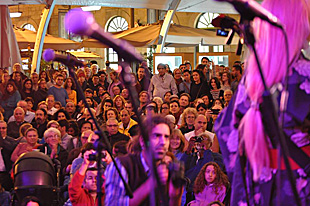 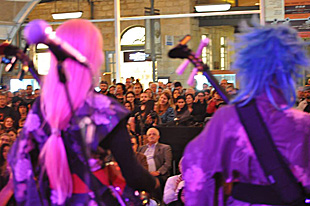 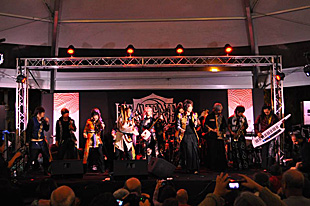 Our manager signaled for us to walk from the anteroom to the stage beside some shops, and we could see the venue was filled with people. Marre, thinking aloud said, "This many people are here?!" We had been informed that there would be less people that night, yet there were more. The venue was packed with people with some even standing at the side of the stage. When we were walking up to the stage, a lady stopped Marre and excitedly said, "Yesterday was the first time I had ever seen you. It was so good that I brought my entire family tonight."

There was by far a much larger crowd waiting for us this night than the day before. Many people who came the day before, brought their friends and family. There were a great number of people who noticed that Idan Raichel was there and realized that HEAVENESE was the reason their super star was there. A sense of excitement and expectation was overflowing from the people.

At The First Station, our sense of worry as to whether people would come or not completely melted away. Our performance as the headlining band got underway much to the audience's excitement. The set list was the same as the day before. 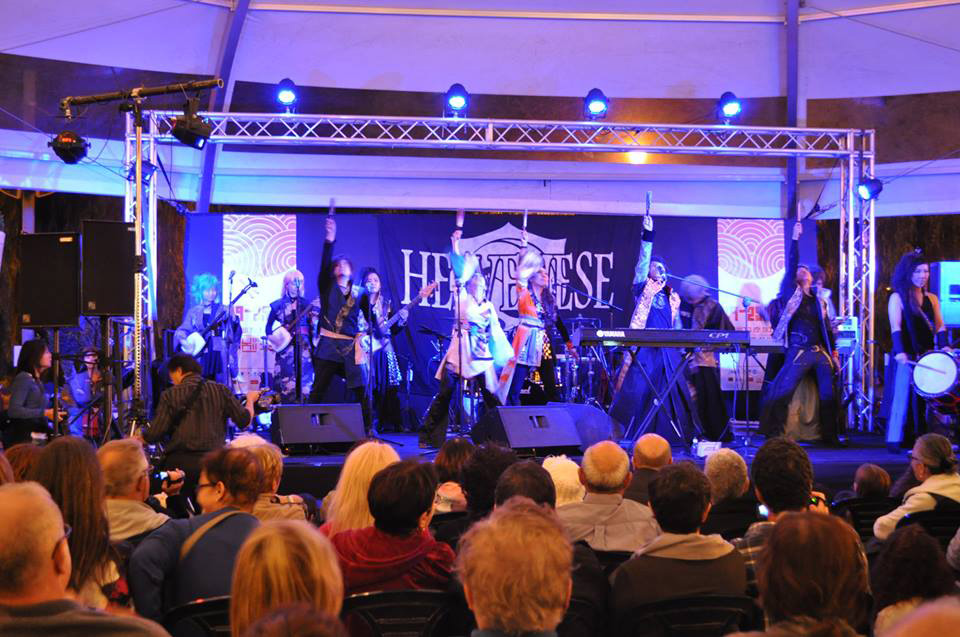 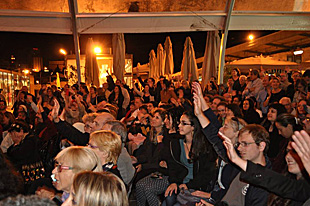 This day, since people from all around the world were present in Jerusalem and out of consideration not only for the Israelis but also the Palestinians, Marre expressed thanks for the Israeli soldiers and all those from around the world who assisted Japan after the March 11th disaster. Furthermore, connecting with the day before, Marre briefly shared that Jerusalem is a city of peace where people of different races and religions live in harmony with each other. As The City of Peace, it can be a good example to the rest of the world. He shared this in a way that would reach both Israelis and Palestinians. 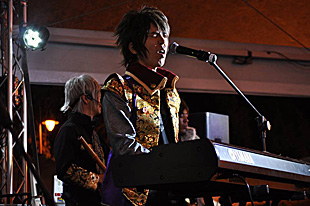 When we started performing Idan's song, just like the day before, loud applause filled the venue. We performed this song without choreography the day before, but this time we did it with choreography. We felt it came together quite nicely. As usual, things are better the second time around. Idan seemed delighted to be there as he videoed HEAVENESE singing his song. Then the people around Idan started videoing him. It must have been a wonderful moment for the audience to hear their super star's song being sung in front of Idan himeself. 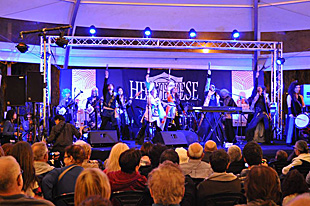 After our song "LIFT" was finished, there was loud applause for an encore. The miraculous story of the Haifa taikos was shared again and was well received. After we performed our encore song, 3N1, we received thunderous applause from the audience. They stood up and relentlessly gave us a standing ovation. Due to the endless clapping, we responded to their second encore request by singing "Tell Everybody". After this song was done, they continued to applaud. What enthusiasm and energy that was. We were moved by the flood of heartwarming praise we received from the audience that night. 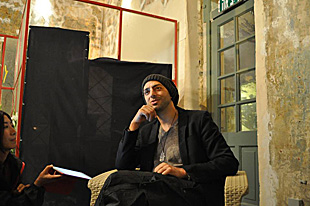 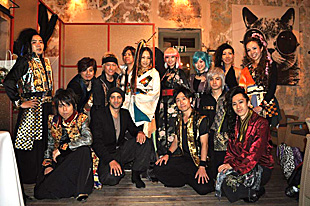 Over and over again, the people repeatedly said,"Thank you for coming." There were some in tears as they shook our hands tightly. This fully conveyed the to us that they appreciated us being there from the bottom of their hearts. After the performance, in the anteroom Idan said, "Our nation, Israel, has been criticized by the world, and Carlos Santana boycotted us, but Madonna and Alicia Keys based upon their convictions of "Not Boycotting People" came to perform. After this most recent war with the Palestinians in the Gaza Strip, you are the first artist to come here from overseas. That's why the people were so grateful to have you here. They knew that you came here not for political reasons but for the people".

"Your came for the people..." that was said by Idan. This is a very significant statement for us. This time, as before, HEAVENESE was supported by the Ministry of Foreign Affairs, who were aware of our mission which was to visit Israel as a delegation of civil diplomacy. However, we were not engaged in political activities, rather through music entertainment, we set out to share the Japanese spirit of harmony. There are people pursuing peace in highly criticized countries like Israel.
There are lay people living in so called "terrorist countries" with whom we can share tears and laughter. Even after the recent war, we experienced the simplicity of life and an overflowing of kindness from both of the antagonistic ethnic groups. 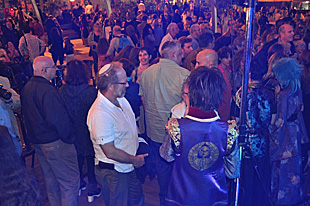 We have a message that can be shared because it's not political. Music goes beyond politics. Greatly encouraged by the words of Idan, we were once again strongly convinced that we must continue on this path all the more.

It was late at The First Station. We had been welcomed with such great enthusiasm, yet headed back to our hotel on a city bus. This is our reality for we are not a famous band. It is good to remind ourselves of who we really are.

After sending off the band members, it was around midnight when Marre and Kumiko left the venue. We only spent two days at The First Station, but we felt sorry to depart from here. It's like a cold wind bringing a sense of emptiness when moving far away from a familiar place.

Our longing to be there was broken by the arrival of a bi-articulated city bus which looked like it was going to tip over from centrifugal force as it barreled in.Buses in Israel are not safe!!!